Alum Cliffs are the British name for Tulampanga, a place of impressive geological history that seems to have been created by explosive tectonic forces thrusting rock up into the air.

But the cliffs were actually shaped by 20 million years of volcanic activity, glacial action and water erosion, highlighting northern Tasmania’s ancient past. 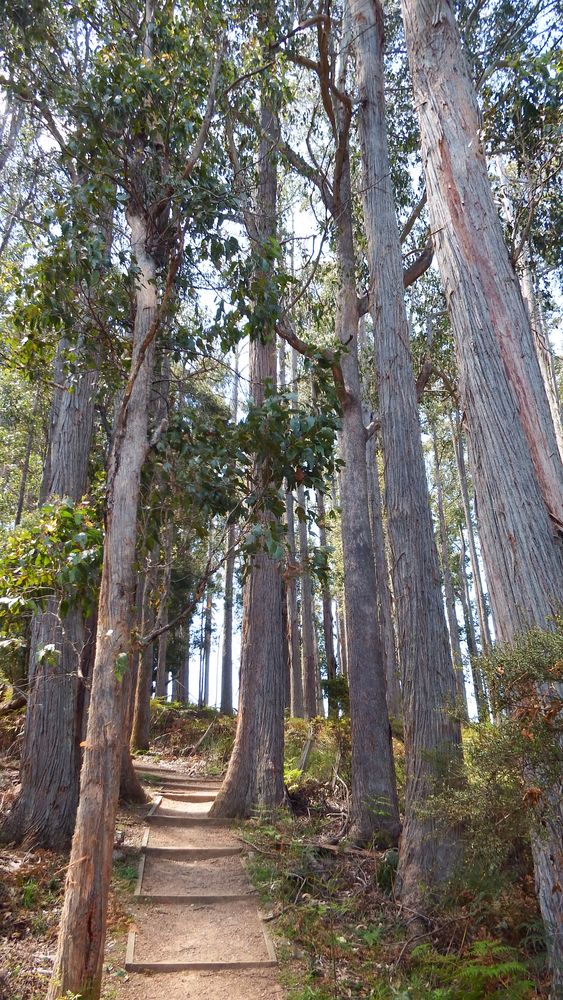 It was my first hike into the bush since arriving back in Australia a week ago, and it was a deeply satisfying reunion on many levels. The walk to the cliffs was not very long, but I took my time trying to recognise the different bushes and trees in bloom. Not everything was familiar, as Tasmania is still relatively new to me. Native bush food is typically abundant in the area, with banksia flowers providing ‘sweet water’, and native honeysuckle, cherry and cranberries providing sweet fruit. 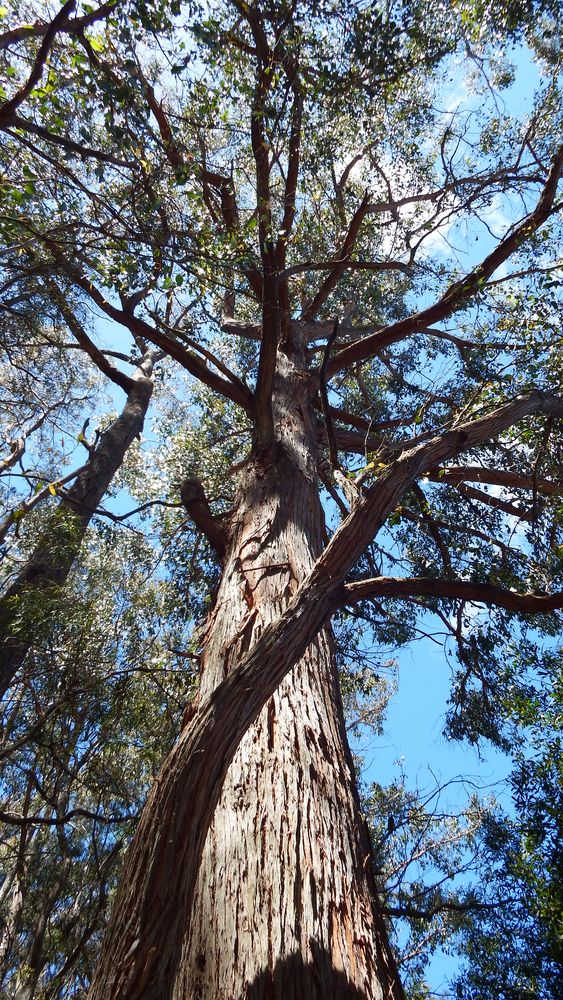 The crown of one of these native giants

While standing still and soaking it all in, there was a rustle in the undergrowth to my left and out popped a spotted quoll - the first time I had ever seen one. It hadn’t caught wind of me and didn’t know that I was behind her. For a moment I was so surprised that I almost forgot to take a photo. Fortunately the quoll wasn’t in a hurry, and meandered along the path before disappearing into the bushes on the other side of the path. If that wasn’t enough, a baby pademelon (kind of like a mini kangaroo) and its mother burst out of their hiding place from the direction where the quoll had gone in. They bounced over the path and were swallowed up by the brush near me. It was more excitement than my camera could handle, both being far too fast for me to capture. 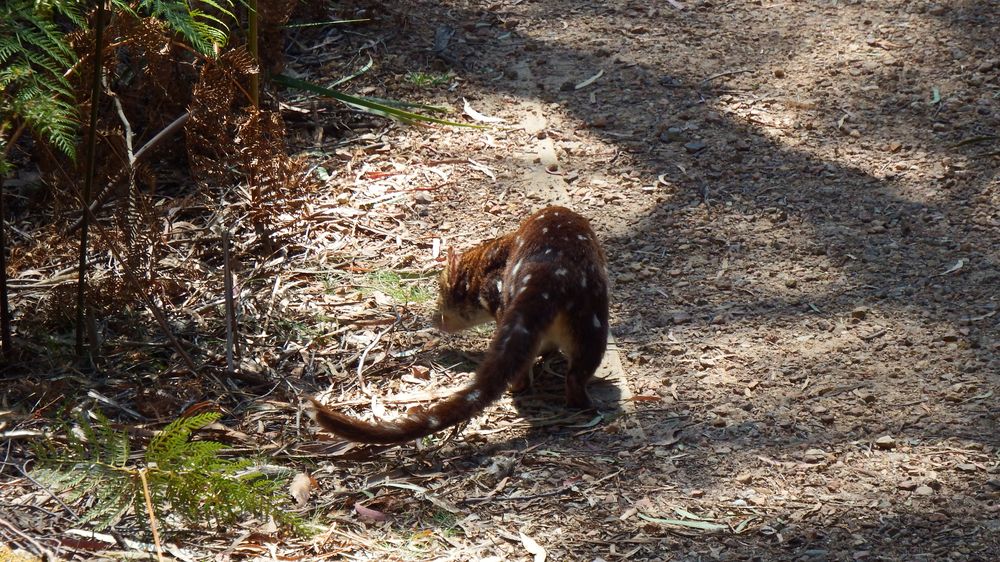 Spotted quolls are protected in Tasmania 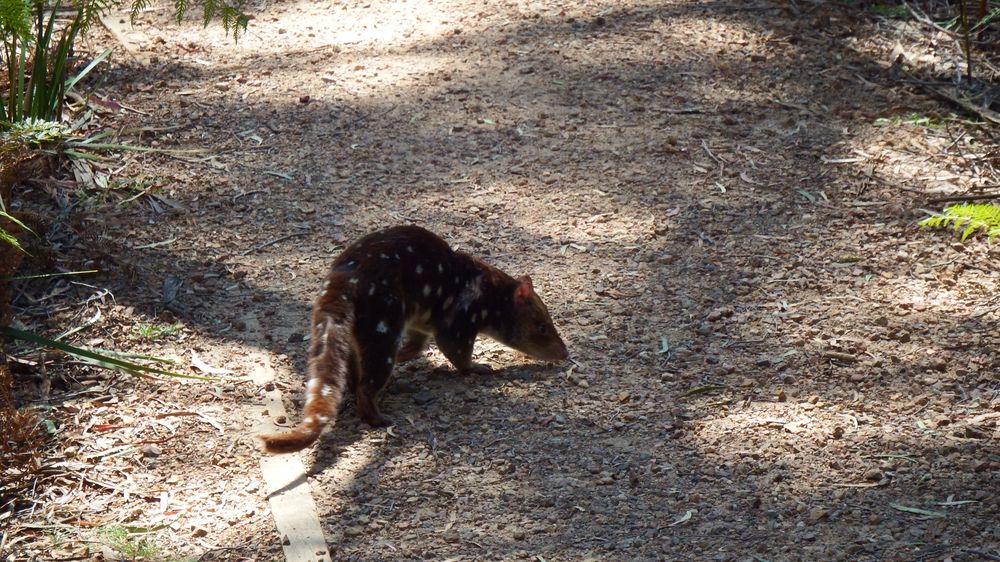 They’re Australia’s native cat, and in some states I’ve heard it’s possible to keep them as pets 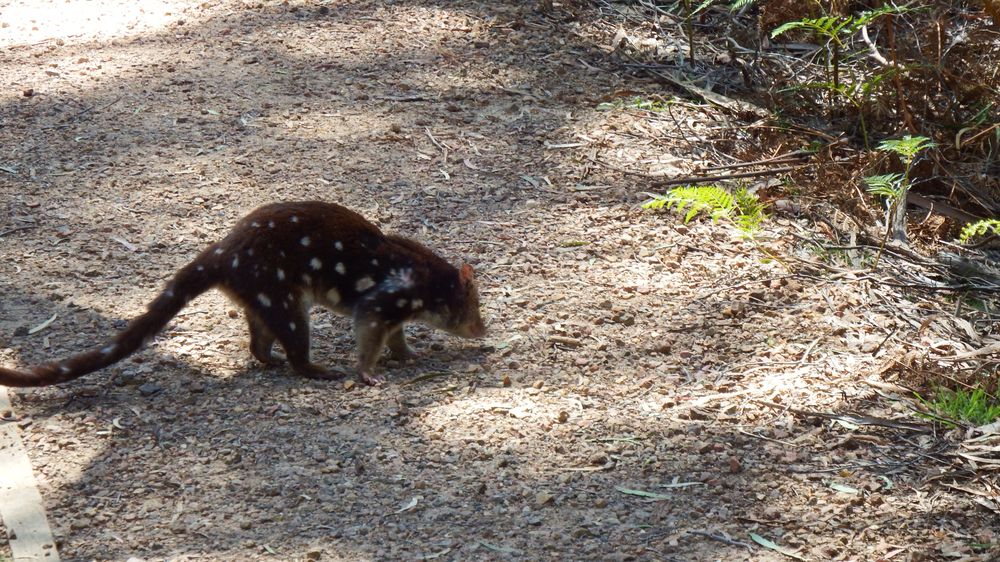 Quite amazed by the amount of traffic I had just witnessed, it felt like the bush was greeting and welcoming me back down under. I happily greeted her back. This was obviously a well used animal crossing, and on my way back to the car I stopped at the same place and waited for more activity. Only the adult pademelon broke her cover and hopped to safety. 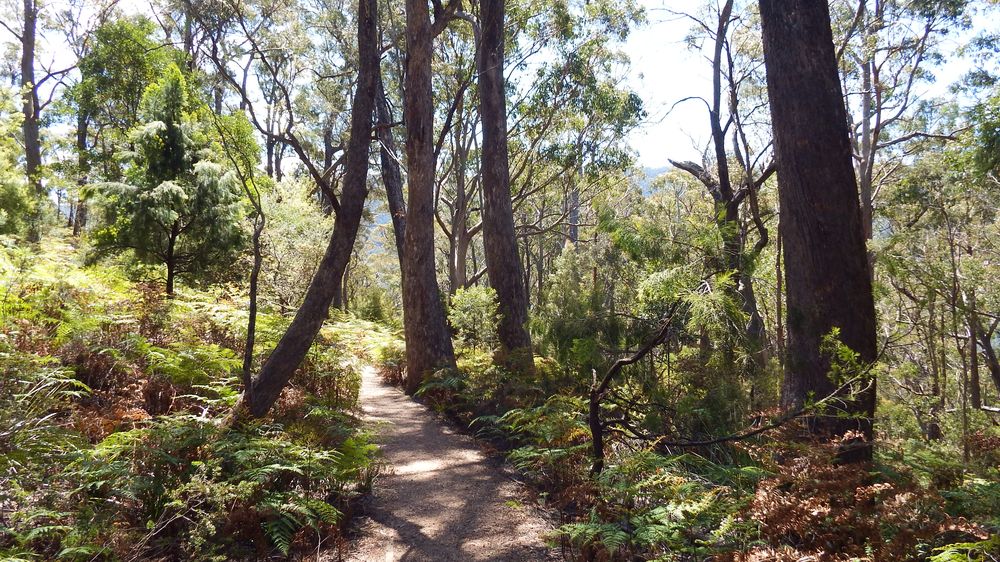 Pathway along the ridge 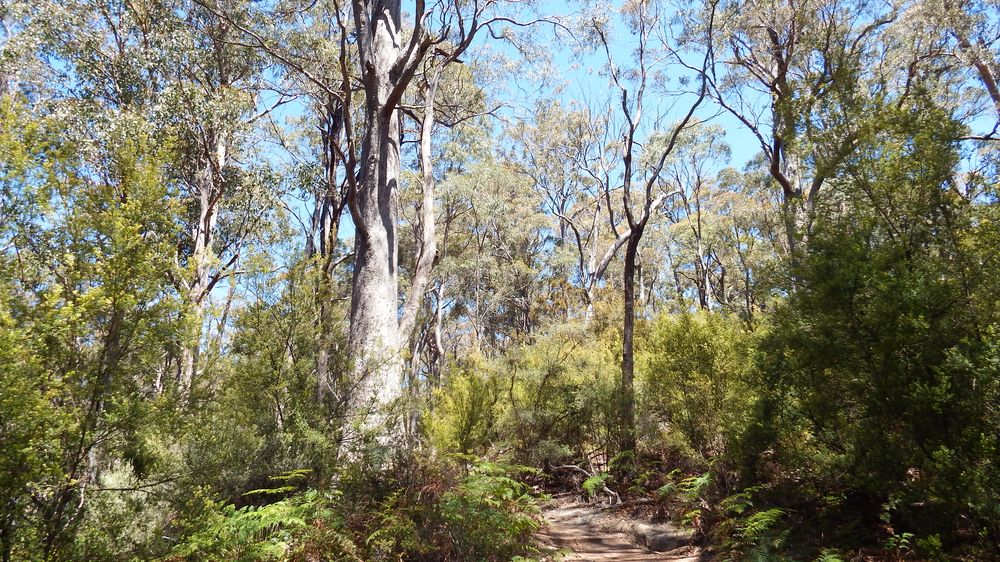 Spring time in the bush 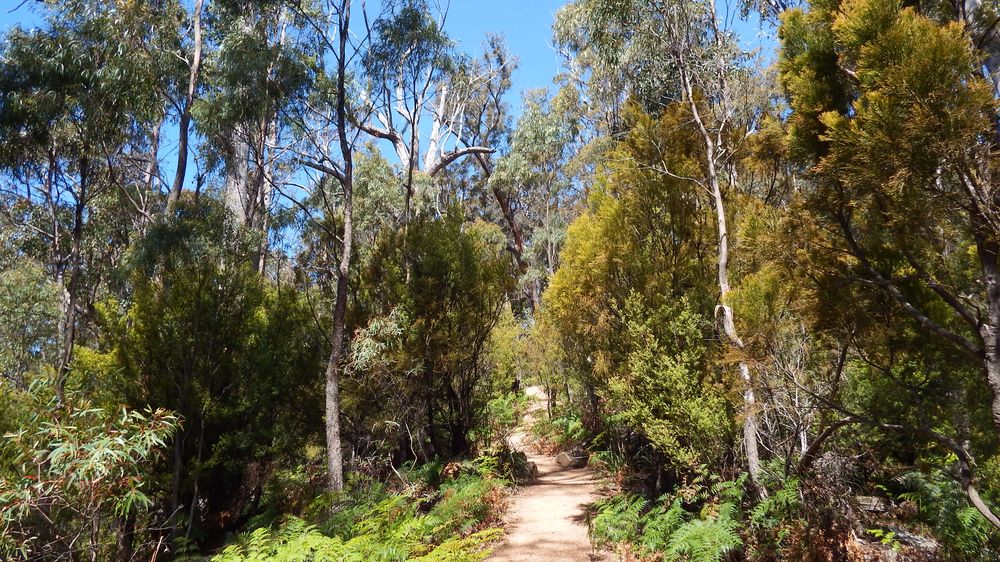 Signs along the path tell the history of Tulampanga: it was originally a meeting place for the Pallittorre, Leterre Mairerer and Lee-now-wenne peoples. They would gather below the cliffs to celebrate traditional ceremonies with song and dance. The name Tulampanga means ‘red ochre hills’, and the area around the cliffs is desginated as a sacred woman’s dreaming site - men are not allowed to attend either the harvesting of ochre or enter the domain of the sacred ochre hills. The ochre itself was highly prized and used as ceremonial paint during corroborrees and also as a trading commodity.

“Majestic in its silence, Serene in its splendor, To my people a haven, A spiritual realm.”

The Alum Cliffs track follows a ridge until you arrive at the Tulampanga lookout, and the valley opens out in front of you with the Mersey river cutting a dramatic path through the Gog range below. To the left are cliffs which seem to be made up of yellowish sandstone, while to the right are the Alum cliffs, so named because of the Alum mineral they contain. Peregrine falcons, a totem animal for the local aboriginal people, are known to nest here among the cliffs, and have done so for thousands of years. 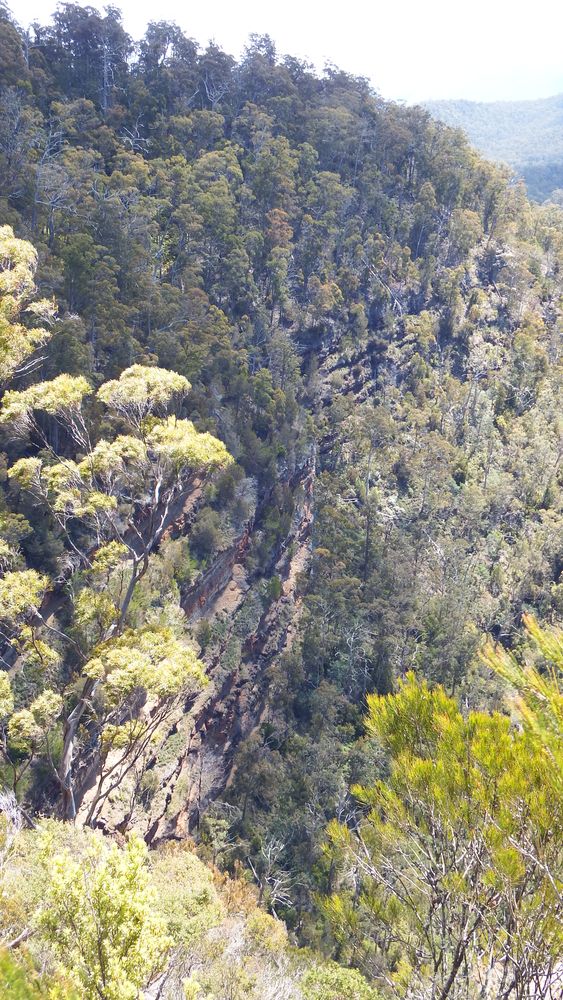 Cliffs to the left 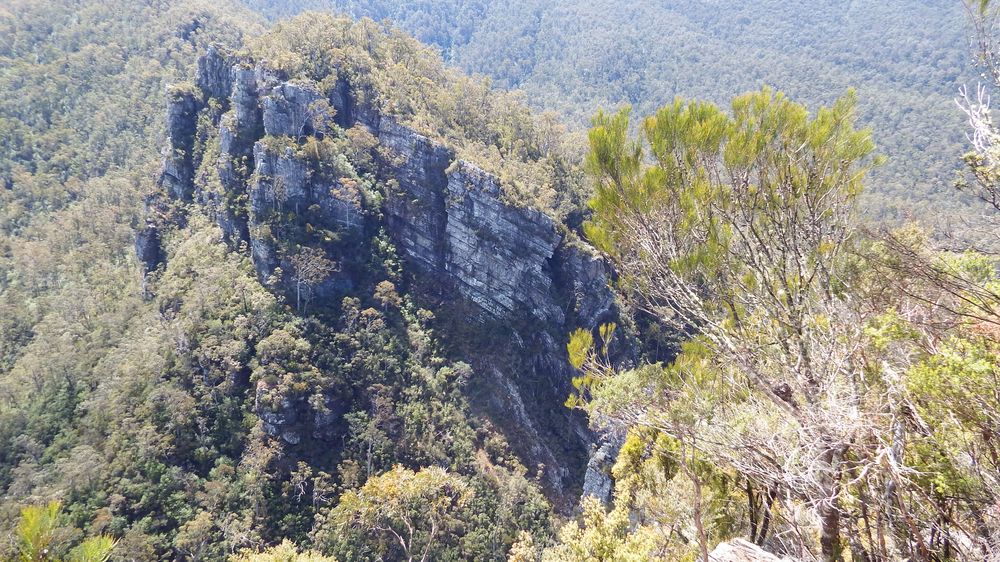 Cliffs to the right

The Australian bush is always a lot more than what you see, it’s also what you hear such as the amazing birdlife, and it’s also what you smell such as the intense mix of eucalypt and wildflowers. There are also the native textures, patterns and colours, as well as the abundant wildlife, which you can most definitely see if you keep still and tune in your senses. On the way back to the car, I heard another rustle in the scrub and saw an echidna out hunting insects. 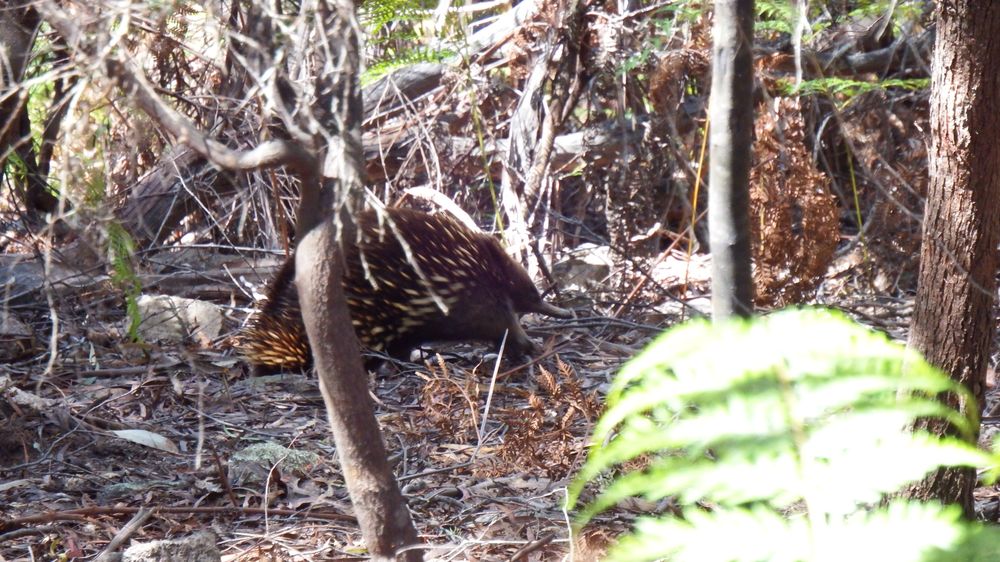 An echidna busy looking for a snack