Landåsbygda – A first taste of Innlandet

Most people haven’t heard of Landåsbygda, and that’s okay. It’s a little Norwegian paradise about a 20-minute drive from Gjøvik and the Mjøsa.

Landåsbygda is one of those places where you can relax and let your shoulders down. Surrounded by a sea of forest and a natural lake as a main attraction, it lies at an altitude of around 550-600 metres in the middle of central Norway’s pristine mountain and forest country.

Landåsbygda, which is pronounced Land-ors-bygda, contains a number of surprises, some of which we’re still discovering even after more than four years living here.

Located roughly midway between the regional towns of Dokka and Gjøvik, Landåsbygda is a rural village with a population of 300 people. Lying within the boundary of Søndre Land council, it was once upon a time a part of the greater Land council. In 1847, the Land council was split into north and south, and ever since, has remained separate - despite an attempt to rejoin the two in 2016. Proud locals voted against the idea, demonstrating the strict loyalties and divisions even in such a small place. 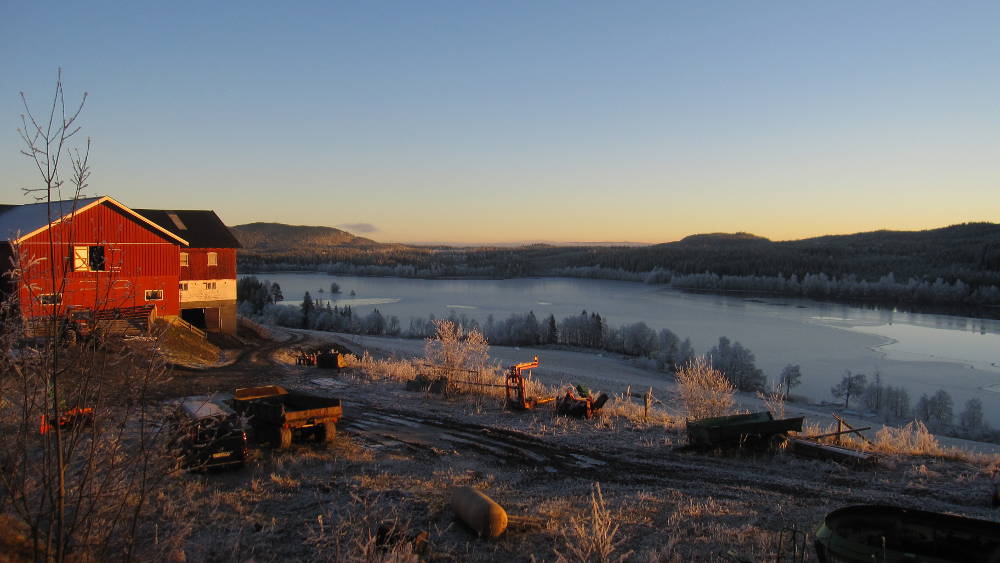 Landåsen is probably one of the stand out features of Landåsbygda. Literally, it means ‘Land’s ridge’ and its prominent hill position is easy to see from our house. Today it’s the site of a rehabilitation centre and one of the local landmarks and a place of historical importance.

Archaeological findings up at Landåsen date human settlement back to the stone age. In those days, the area was known as Aas or Hillestad - a place that often changed hands. At one point it was owned by the diocese of Hamar, then later by one of Norway’s first prime minister’s, who acquired it after purchasing the surrounding forest.

In 1914, Landåsen was turned into a kind of wellness hotel, which indirectly paved the way to its present incarnation as a rehabilitation centre. Today its professional health services attract a steady stream of patients all year round.

The centre is behind the fabulous hiking trail network that shows off the beauty of Landåsbygda on both sides of the lake and beyond.

One of the most stunning hikes that centre patients and locals can do is up to Venholhøgda (750m), the highest mountain in the local area, where a breathtaking 180-degree view of the local area can be enjoyed.

Even in winter, cross country ski trails are maintained and it’s not uncommon to find snowshoe hikers down at the lake, moving against the backdrop of silent snowfall. 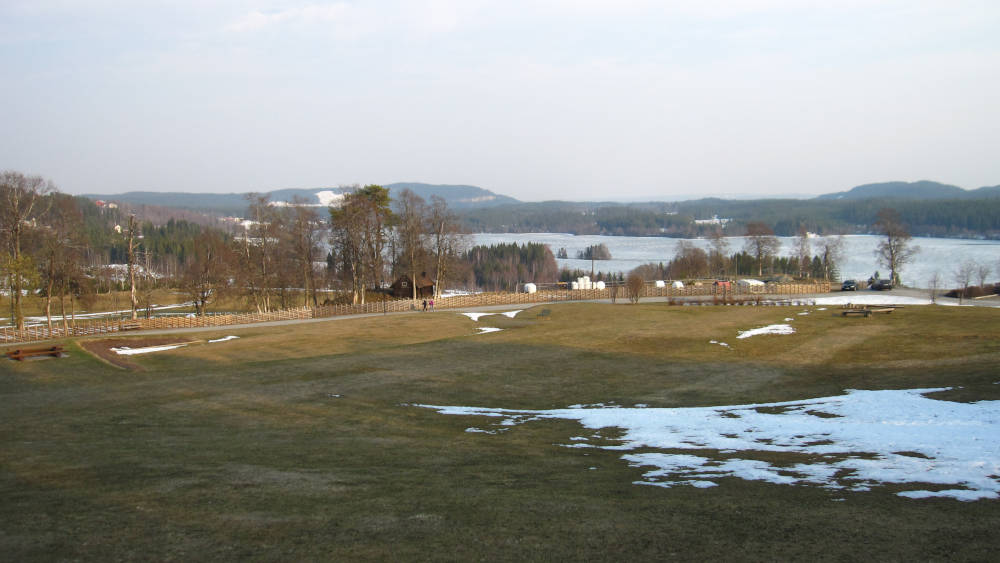 View down to the lake from Landåsen

Landåshaugen is the hill onto which the Landåsen centre backs. This hill offers history in the form of Viking burial mounds located at its summit. There’s a horse riding trail that goes up and around Landåshaugen, but to make it to the very top, you’ll have to blaze your own trail on foot. The magical view from the top overlooks Bergstien, the little forest path connecting Landåsen to Landåsvatnet the local lake.

If you take a walk along Bergstien you’ll soon come to a home-made gapahuk (emergency wooden shelter) and a rustic barbecue area with a stunning view of Landåsvatnet. Built by the locals, it’s testimony to Norway’s appreciation of the outdoors and faith in social responsibility and trust, with a range of DIY outdoor furniture, BBQ equipment and hyggelig (cosy bliss) effects like cushions, available to anyone who wishes to use them. The implied rules of ‘take care’ and ‘leave everything for the next person as you found it’, are very much observed.

Having a hot drink and enjoying the view of Landås lake from the comfort of a crackling fire is like meditation in motion. The lake is no doubt the main natural attraction and the perfect place to fish, swim, picnic or relax in the sun.

A relatively flat forestry road goes right around the lake’s southern border connecting back to the main Fv 132 road (also known as Landåsvegen and Sevalvegen) which takes you in and out of Landåsbygda. The route around the lake totals a distance of approximately nine kilometres (if you use our home as both start and finish).

The forestry road hooks up with one of Landåsbygda’s best kept secrets: Den Gamle Ridevegen, the old riding trail which has been in use for over 1,000-years. It connects Landåsbygda with the nearby village of Fluberg down at Randsfjorden. Runners, hikers and horse riders alike can enjoy 25 kilometres of trail offering amazing views of Randsfjorden, the Dokka delta and wetlands reserve. 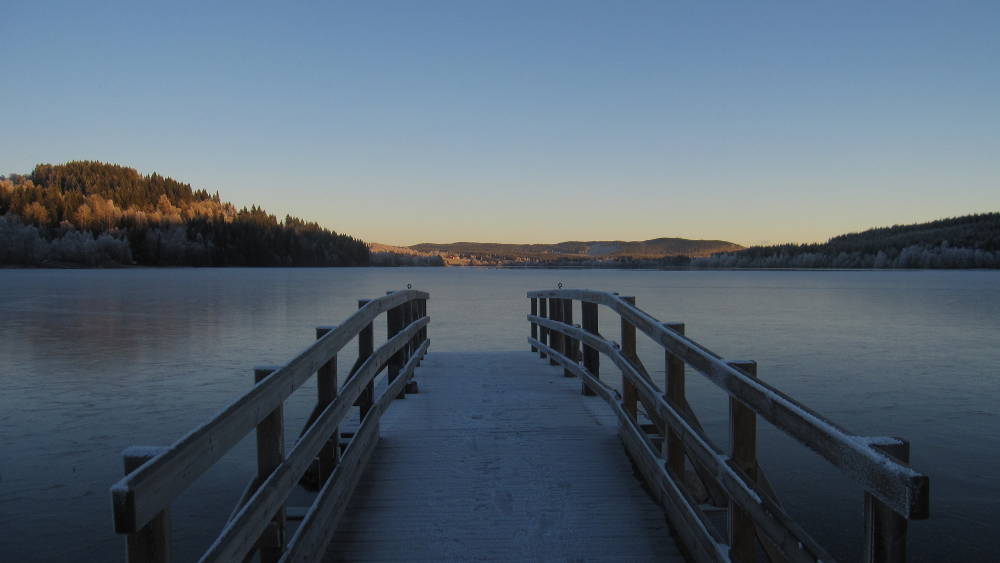 Brennodden and the pier down at the lake

As for some of the other places in and around Landåsbygda, Brennodden is what you’d call the local ‘meeting place’. Situated down at the lake’s edge, next to the fishing pier, it has a large grassy area where several social events organised by the Landåsbygda Velforening (local community association), such as the St Hans bonfire on the 23rd of June, take place every year.

Directly opposite Brennodden is Dammen and Saga, also known as Landåsbygda’s ‘industrial zone’. Every year a group of enthusiasts meet here to show off their vintage bikes, tractors, cars, buses, and trucks.

The nearby farm that overlooks Dammen was given the name Kvernhushaugen by Bishop Jens Nilssøn of Hamar, as he travelled through the region back in the late 1590’s. (A kvernhus is where the grinding of grains takes place.)

The Saga (sawmill) was also built down at Dammen. The water running off the lake was used in both the saw and grinding mills. It’s still possible to see the remains of these two buildings at the edge of the Landås river, as it heads down to Randsfjorden, Norway’s fourth largest lake (and not a fjord at all).

Moving up from the lake along the main road, you can easily spot the oldest building in Landåsbygda called Brenden Store, which was built in 1730. It still stands in all its glory, but today is uninhabited and starting to feel the effects of many long winters.

Further up the main road is the Landåsbygda chapel, and former local supermarket and post office, which used to form the social heart of Landåsbygda. The chapel offers services several times a year celebrating Easter, Yule and Norway’s national day.

Several farms surround the former local supermarket, such as the historic Villa Granne, where the original Landåsbygda post office and store (1916) used to operate.

On the way out of Landåsbygda heading towards Gjøvik, you’ll find the sign to Kronviksætra farm. Originally an alpine hut where two Sami lived, today it offers farmstay accommodation, with several Viking graves near the old sheep barn. One of Kronviksætra’s neighbours practises traditional non-motorised farming, and you can often see him preparing fields and harvesting hay with his horses.

Across the road from Kronviksætra is a bird biotope called Ospeskogen (aspen forest). The forest is a natural wildlife sanctuary for woodpeckers and almost half of the 35 different cave breeder birds native to Norway. More Viking burial mounds and graves are found above Ospeskogen.

Birds are not the only kind of wildlife possible to see in Landåsbygda. Visitors may also catch the occasional glimpse of long-legged moose dashing across the road, followed by smaller moose, perhaps a dog, and an exhausted looking hunter trying to keep up (in autumn).

Of course, there’s also rumor of bear, which is actually a neat little tale told by locals to naïve newcomers. When we first moved to Landåsbygda, one of the friendly local fishermen down at the lake told us about sightings of bear, wolf and lynx. It all sounded fantastic to our ears.

Lynx sounded plausible, but bear and wolf – this far west from the Swedish border? Coming from the land down under and knowing how Aussies love to tell tall tales about drop-bears and killer koalas to scare the tourists, I thought there might be a tall tale in the making here. Fortunately, during one of our hikes last year, I found the source of the ‘bear’ tale in a magazine.

The bear story dates back to a freak event in the early 1990’s when a Swedish brown bear decided to go walkabout. The bear crossed the Swedish-Norwegian border on its way to Lillehammer, where it swam across the Mjøsa and hiked all the way to Land. No doubt hungry after its long journey, it ate one of the local sheep, which of course didn’t please the farmer.

When the sheep was found (in bits and pieces), the authorities were called in. They promptly caught the bear, sedated it and transported it back to Sweden. Unfortunately, the bear died on the way home (maybe too much sedation). This one incident documents the entire history of bear in Land.

While Landåsbygda may not be a bustling metropolis, it’s not exactly a boring place either. Having hosted quite a number of Airbnb guests, we’ve found that it’s an ideal starting point for experiencing Norway’s unparalleled outdoors.

Many tourists flock to the capitals or heavily promoted attractions, like Oslo, Bergen, Preikestolen, Trolltunga and Besseggen. Of course, these places are swamped in the summer season for a very good reason. They’re stunning. But Norway is a huge country, and there are many alternatives where the ‘wow’ factor is just as, and maybe even more, spectacular because you can have the whole place to yourself.

Landåsbygda may make up a small part of Oppland, but it’s in an area rich in history due to its fortunate position to the east-west and north-south transport and trade routes.

Since our arrival in Landåsbygda, we’ve naturally been occupied with exploring our new home and discovering everything that it has to offer, as well as unravelling the hidden secrets of this beautiful part of the world. Part of the adventure is meeting the people that make up the little community we are a part of, and listening to their stories.

There are so many ways to experience Norway. Sometimes the places with the smallest footprints have the biggest and most authentic adventures to offer. That’s how we feel about our new home in Landåsbygda.